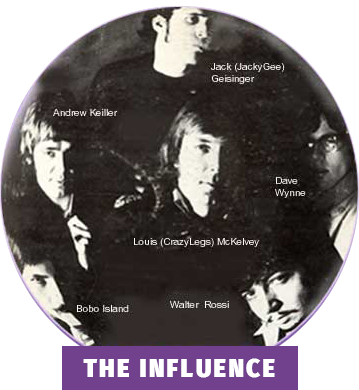 Walter’s first band after Pickett
Influence were one of the most fascinating bands to emerge from Canada during the ’60s. The group’s rich diversity of styles was a result of the group members’ wide range of musical backgrounds and geographical origins.

The band’s driving force was lead guitarist Louis McKelvey (b. October 31, 1943, Killorglin, County Kerry, Eire), who had spent the early ’60s playing with West London bands, The Persuaders and Jeff Curtis & The Flames (the latter frequent residents at the Ealing Jazz club where The Rolling Stones often played). After travelling to South Africa in the summer of 1965, he quickly befriended singer Andy Keiller (b. August 16, 1941, Bodmin, Cornwall, England), who had already recorded a solo single, “Find My Baby/Elaine”, and an album entitled “Round About Midnight” after moving to South Africa in March 1964.

Together they formed The Who-inspired band The Upsetters, named by McKelvey after Little Richard’s first support group. The Upsetters recorded a lone single, “Daddy Rolling Stone/Pain In My Heart”, issued by the small Trutone label in late 1965. When Keiller left to return to London in November, McKelvey subsequently joined local rivals, The A-Cads.

McKelvey was only a member of The A-Cads for a handful of months, but arrived in time to appear on the single “Fool, Fool, Fool/Zip-A-Dee-Doo-Dah” issued on RCA Victor, and also helped finish off the band’s lone album. Together with A-Cads members, Hank Squires and Les Goode, McKelvey returned to England, where the trio (managed by Mickie Most) hatched plans to move to India. The project however, never materialised and McKelvey (later joined by Squires) moved to Montreal in late 1966.

McKelvey first played with Les Sinners for a few weeks then joined Our Generation in time to appear on their second single, “Cool Summer/Out To Get Light”. During his time with the latter outfit, he was given co-production credit (with Hank Squires) for The Haunted’s single “Searching For My Baby” and through that group met former member, drummer Dave Wynne (b. May 17, 1947, Stockport, Manchester, England).

McKelvey subsequently recruited Wynne for the new group he was planning. Around the same time, McKelvey befriended bass player Jack Geisinger (b. Jakob August Geisinger, March 1945, Czechoslovakia), who had recently been playing with The Buddy Miles Quartet and before that The Soul Mates. When Buddy Miles and the group’s guitarist and organist, Walter Rossi (b. Rossignuoli Rossi, May 29, 1947, Naples, Italy) and Bobo Island (b. Bob Parkin, Montreal, Canada), were picked up by Wilson Pickett for a brief US tour, Geisinger accepted McKelvey’s offer to join the new group. Shortly afterwards, McKelvey spotted an ad in a local music paper, posted by Andy Keiller (who had moved out to Montreal in spring ’66 and had tried to contact McKelvey after seeing him playing with Our Generation on TV), and invited him to join as the band’s lead singer.

Formed in April 1967 the quartet, named Influence, immediately made its presence felt and became regulars at Montreal’s Barrel opening for jazz musicians like Archie Shepp, Sonny Murray and members of John Coltrane’s Ascension. A short while later, Rossi and Island returned to Montreal and, after catching the band’s set, joined Influence. The new line-up became more musically adventurous, with Island adding a second lead voice. After tightening up their act, Influence moved to Toronto and became a regular sight at Boris’ Red Gas Room during the summer.

In late 1967, the band sent a demo tape to producer Dennis Minogue at ABC Records in New York and subsequently recorded a lone album on four-track that was issued early the following year. “Influence” is a startling piece of music and clearly shows how unique the band was. However, it didn’t sell well and is now something of a collector’s item. The highlights include the chanson styled “I Don’t Know Why”, composed by Rossi and Island, and heavier pieces like McKelvey’s “Natural Impulse” and “Pieces of Me”, the latter co-written with Andy Keiller.

Shortly after the album’s release, Montreal drummer Frank LoRusso (aka Yum Yum) replaced Wynne. The new line-up toured extensively in the US Midwest and the New York area throughout the first half of 1968. A live recording taken from a concert in Chicago supporting Steppenwolf was captured on a non-professional tape but subsequently shelved and immediately afterwards, Keiller left to return to Montreal (he eventually returned to the UK briefly before emigrating to Australia).

The band struggled on (adding ex-Soul Mates horn player Tony Morgese), but internal differences led to McKelvey’s departure during the autumn. The remaining members continued into 1969, but fell apart when Rossi joined The Buddy Miles Express and Geisinger left for McKelvey’s new group Milkwood. LoRusso later rejoined McKelvey in the biker band, Damage but sadly passed away in recent years.

During early 1970 Island and Rossi briefly reunited, appearing on Buddy Miles’ “Them Changes” single. Rossi soon moved on rejoining Geisinger in The Apostles, which evolved into heavy rock band, Charlee. Following a lone album, Geisinger went on to record with Moonquake among others while Rossi established a solo career with a string of albums on the Aquarius label. Both currently live in the Montreal area. Former band mate, Island was subsequently killed in a highway accident in June 1970.

None of the other original members have maintained a musical profile. Dave Wynne currently lives in Singapore; Keiller runs a fibreglass business making bodies racing cars in Melbourne and McKelvey is a skilled carpenter and lives in Toronto.

Though short-lived Influence were without a doubt one of Canada’s most musically inventive bands. Peter Townsend was reportedly impressed by the band’s mini-opera “Mad Birds of Prey”, and Influence’s musical diversity and level of musicianship were highly respected by the group’s contemporaries in Toronto.

Many thanks to the following for their help in piecing the story together: Louis McKelvey, Andy Keiller, Dave Wynne, Jack Geisinger, Carny Corbett, Bill Munson and Tertius Louw.

I have tried to ensure that the article is as accurate as possible. However, I accept that there may be errors and omissions and would be interested to hear from anyone who can add material or correct any mistakes. I can be contacted at Warchive@aol.com 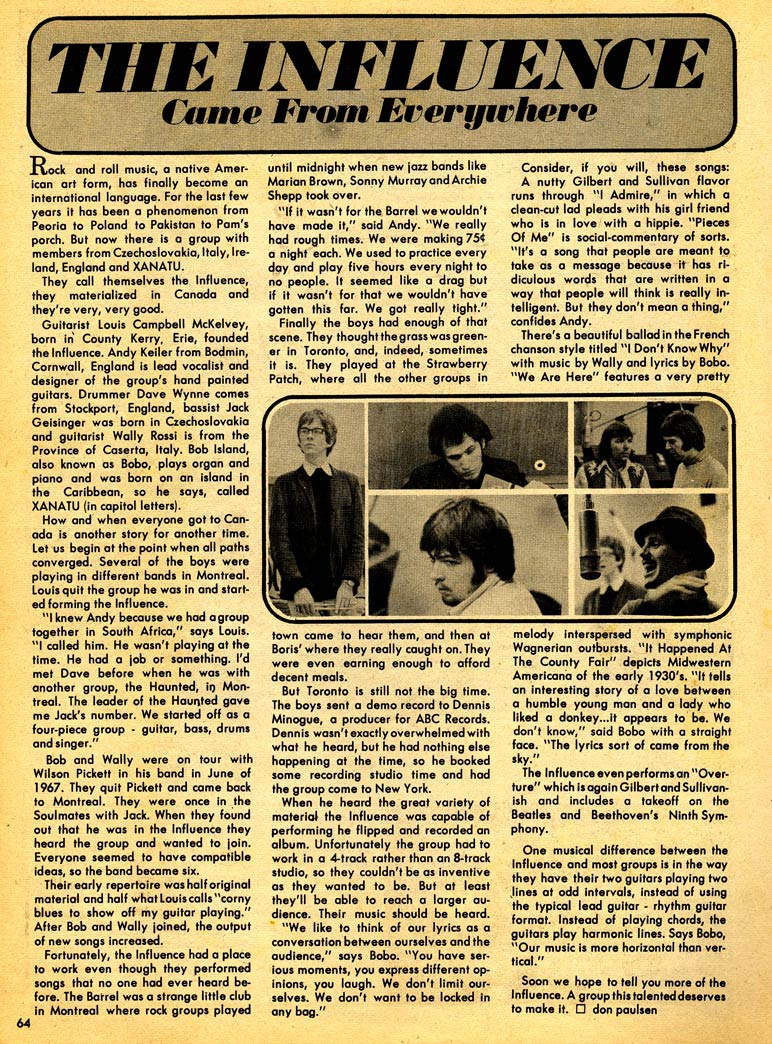 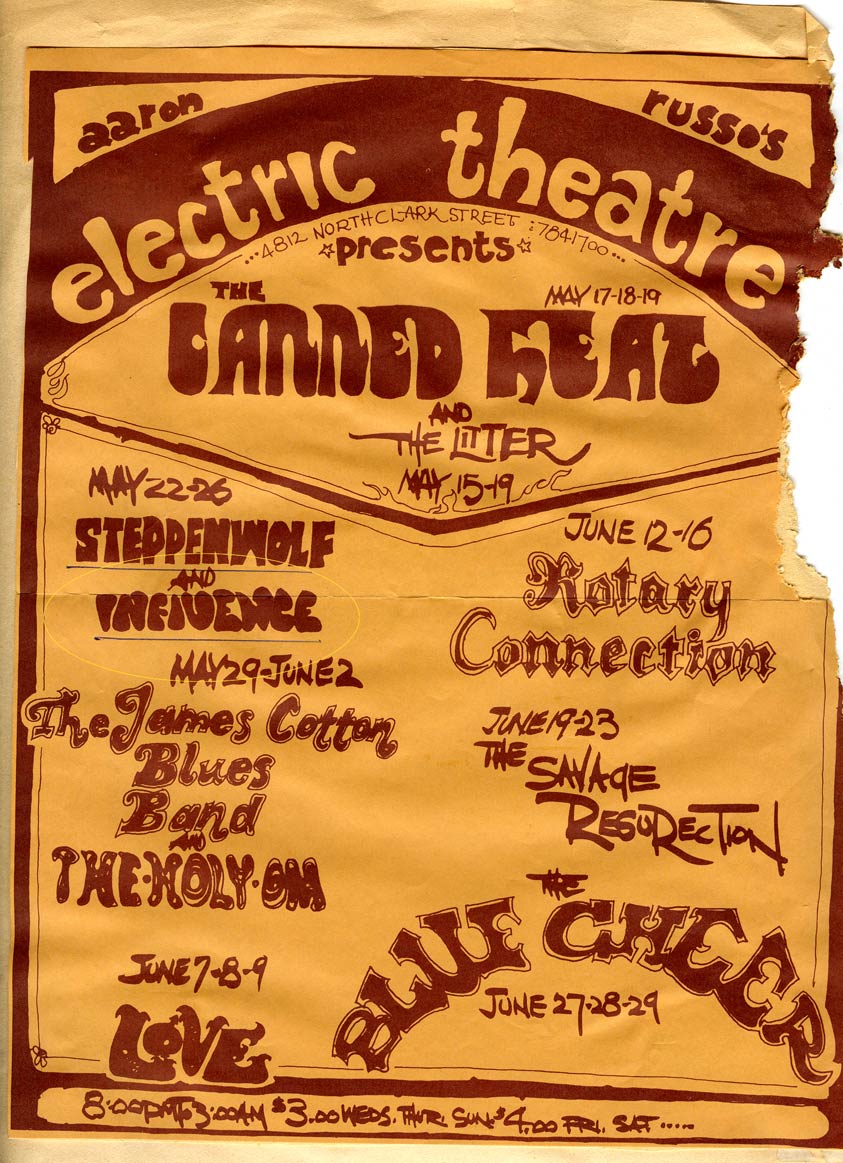 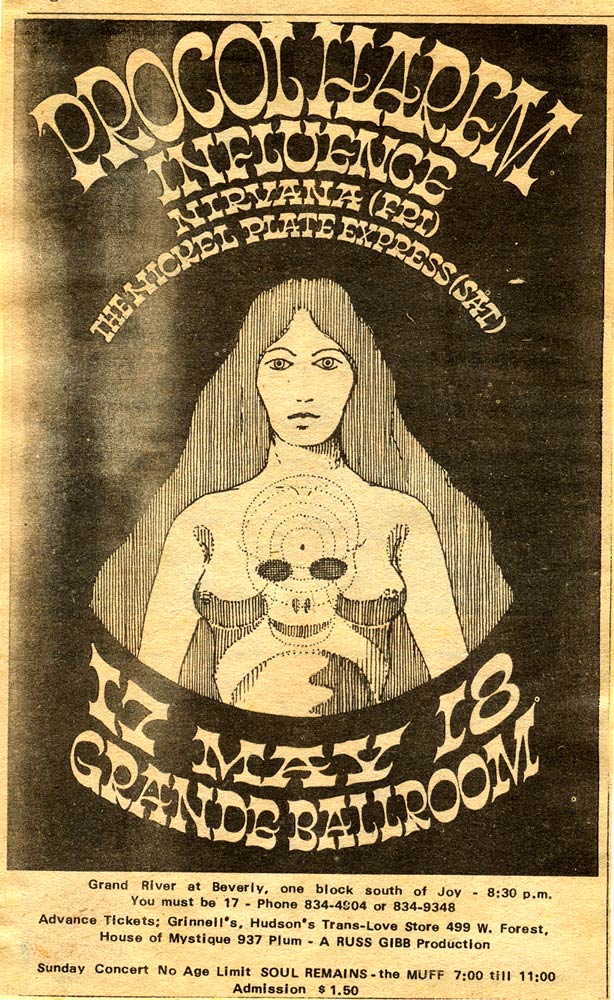